I’m currently waiting for the boards for my Ultrasonic Anemometer Rev B to arrive from Hong Kong and this gives me some time to write about the MPPT Solar Charger design that I did quite some time ago. I published a series of posts on a Arduino MPPT Solar Charger Shield and got a lot of encouraging feedback. But that shield was more of a proof-of-concept than a finished product.  While it generally performed well it drew way too much current when idle to actually be deployed unless you can count on plenty of sunshine every day.

While I like the Arduino platform I had to admit that it’s probably not ideal for a low-power design. Yes there are some things you can do to reduce the 50mA or the Arduino draws but it will never be truely low power. So I designed a stand alone version with plenty of extra features that I hope to draw only a small fraction of the current. I particularly care about the idle current, i.e. the current it pulls when the solar panel is not producing any energy. In winter, the panel might be covered by snow for weeks and you don’t want your charger to drain the battery during that time. With this new design I’m aiming for an idle current in the tens of microamps. Even if it ends up being 100 microamps that is still 500 times less than an Arduino uses just by itself. And that means it draws less than 1Ah (ampere-hour) per year so you will never drain the battery no matter how little sunshine there is.

At the core of the design is a PIC18F26J50 in a 28 pin SOIC package. It’s capable of running at down to 2.15 volts and consumes extremely little power when running at lower clock speeds. And apart from that it features USB so we can have all the benefits of USB without any external components except, of course, a USB socket.

Now we can run the microcontroller at only a few volts but our power supply is a 12 volt battery. So one of the most straight forward things to do in order to save power was to use a switch mode step-down regulator aka buck.

I looked around and found the Texas TPS62120. It’s only capable of providing 75mA but that’s more than enough for us in this case. It works at a switching frequency of 800kHz and only consumes a bit more than 10 microamps with no load at its output.

It needs a 18uH inductor as well as some ceramic capacitors to work. The output voltage is set via a pair of resistors acting as a voltage divider. I’ve added a n-channel mosfet that allows the PIC to increase the output voltage from 2.2 volts to 3.3 volts when needed. Because while the PIC can run on down to 2.15 volts the display can’t. And even the PIC needs 3.0 to 3.6 volts for USB operation.

The actual MPPT converter has changed only little. I’ve changed the mosfet driver to a MIC4605.  Unlike the IR2104 used last time, this model has adaptive dead-time (as opposed to the longish 540ns fixed) and separate inputs for each mosfet. This will allow us to either operate in synchronous (using both mosfets) or asynchronous (only using the upper fet and relying on the diode) mode. Asynchronous operation has a certain efficiency advantage at low power levels so this might come in handy.

The MIC4605 consumes quite little quiescent current for a mosfet driver, only 100uA typical. But that’s still too much for our purpose. So the PIC can power the whole thing off via a NPN transistor and a p-channel mosfet. That BUCK_ON signal also serves as the supply voltage for the INA213 current sensors already used in the last version. So the entire converter can be powered off and should consume precisely zero current when not in use.

What about the voltage divider necessary to measure the battery voltage? That’s been taken care of, too. That divider is interrupted by a (low threshold voltage) n-channel mosfet unless a signal from the PIC turns on the mosfet and closes the circuit. 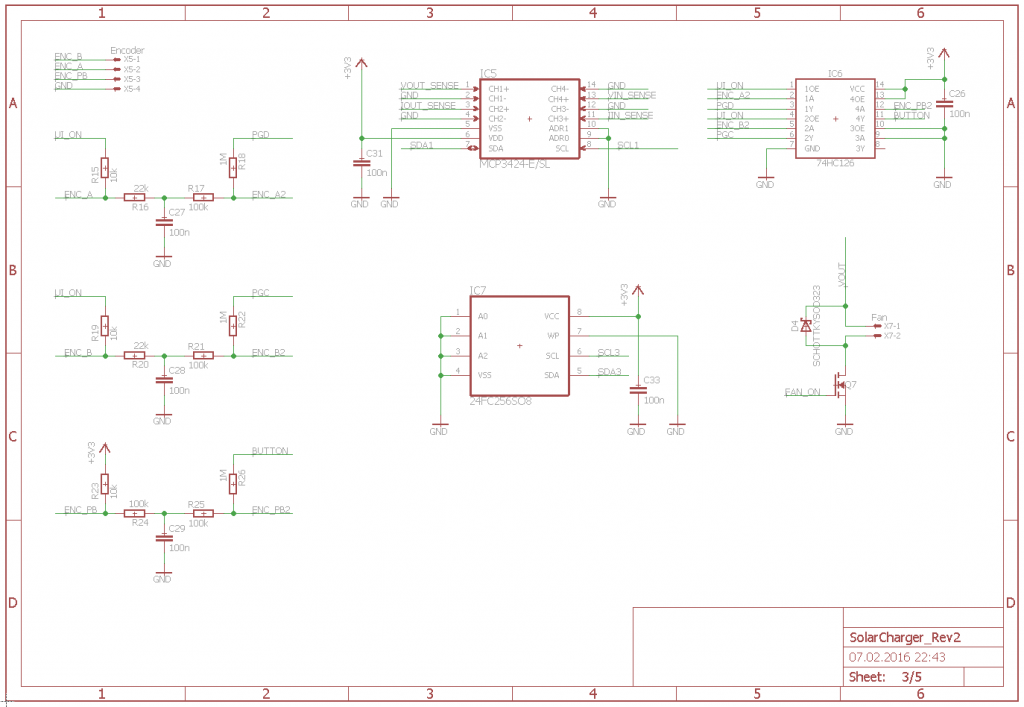 I soon ran out of GPIO pins with that PIC so I had to add an I2C port expander (MCP23008) to gain another 8 I/O pins. I’ve also added a PCA9546 I2C switch in order to translate between different voltage levels.

It’s probably not the most elegant solution and a future version might trade these 3 chips for a higher pin-count PIC. But I had all components here already so that’s what I’ll use for now.

In order to precisely measure input and output voltages and currents there is now a MCP3424 4-channel 18-bit ADC. To be sure, we don’t need 18 bits of precision here but we’ll trade some of that precision for speed and work with 14 or 16 bits.

The ADC has its on-board voltage reference and PGA with gains up to 8.  Since it only consumes a maximum of 1uA in standby mode it is always powered on.

Measuring temperatures requires the board voltage to be high, 3.3 volts nominally. So both the voltage reference and the temperature sensors are only powered on when then VCC_HIGH signal is set.

To communicate with a human user there is a 4×20 LCD display that is controlled via I2C in order to save some I/O pins. There are quite a few external components needed to run it at 3.3 volts so it has its own PCB and connects via a 5-pole wire. There is 3.3 volts and ground for power, SCL and SCD for I2C communication and a PWM singal in order to control the display brightness. Because that’s a rather universal board I will document that as a separate post.

As an input device there’s a rotary encoder with push button. Together with the display (and some decent software) that should allow for a pleasant user experience.

The inputs from the encoder are debounced in hardware via a 74HC126 that serves a double purpose. With its 3-state outputs it allows us to use the pins that are otherwise used for in-circuit programming of the PIC.

One might be interested how much energy has been harvested by the solar charger over the last hours, days, weeks or months. So there’s some non-volatile storage as well. The 24FC256 connects via I2C and offers 256kBit of memory. It consumes only 100nA in standby so it can stay powered on at all times.

As mentioned, there’s a temperature sensor on the board. If it gets too hot, a fan can be powered on via the FAN_ON signal controlling an n-channel mosfet.

There are 4 power outputs, each controlled by a separate signal from the PIC. There should be some PWM modules left on the PIC so some (two I think) can be PWM controlled. A typical application would be LED lighting which can be controlled and dimmed directly from the solar charger via the rotary encoder. Each output channel has a beefy  mosfet of the same type as the MPPT switcher (IPB136N08N3).

Each has its own FAN3111E mosfet driver. They have a separate input for the reference voltage so the PIC can easily control them when running at only 2.2 volts. The FAN3111 should only draw 5uA (10uA max) when idle but there are 4 of them so they can be powered off (all togeher, not individually) when not in use.

One of the first thing one wants to do when there is power is to charge one’s cell phone or similar device. So there are two USB charging ports capable of delivering some 2 amps of current at 5 volts in total.

They are powered from the 12V batter via a TPS54231 buck converter. So there are a total of 3 buck converters on this board… It is always connected to the 12V rail but the PIC can turn it off when not in use. The regulator’s shutdown current consumption is only 1uA typical (4uA max) so that should be adequate.

Manufacturers of mobile devices have all come up with nasty ways of making their devices incompatible with other manufacturer’s chargers. They basically abuse the otherwise unused (for charging purposes) data lines to recognize their own chargers and discriminate against any others. That might mean they won’t charge at all or only at a slow rate.  So there are two charging ports on this board, one emulating an iPad charger and the other one a popular Samsung scheme. So pretty much any device should be able to charge on at least one of these ports at a reasonable speed.

As you can see, there’s a lot of functionality in this new design just waiting to be unlocked by some clever software.  I’ve already milled a board and I’m looking forward to populating it and bringing it to life. I guess that will be quite a bit of work but I think its well worth it. Thanks to all of you who have kept asking about this project – I very much appreciate all your feedback.

There are only Eagle files (including PDFs of the layout and schematics) at this point. They can be downloaded on the overview page. There’s now also a prototype. First test results are presented here.